Oh shit it's been months, anyway they're in Hell

Here's what the players have been up to... 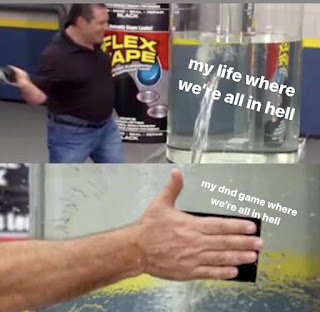 After polishing off the Astral Plane and the Turned Castle of the Blood Queen, they went and explored a little bit of the tunnels behind Terrifex the Purple Dragon, an ancient archdragon who, among other things, slew the titan Iat and sleeps in his crown inside a bottomless pit made by Terrifex's reality warping presence. The players found dwarf warrens and corroded broken dwarves and withered gnomes and the throne of the old earth kings, now demolished by an earth demon, which was impaled by the dwarven spear Lamix, The Holy Avenger, which deals an extra +2d10 damage to demons and has a Protection from Good and Evil aura. Maybe now hell is a good idea . . .

They knew that the third and final piece of the Skoros Orb was pulled into hell upon the death of Illith Varn. Illith Varn's severed head told them directly that a gate to hell was situated in the back of a temple to a bizarre and violent demon god whose dead adherents claim created reality. This god, Aameul,  has an Archbishop somewhere, who may know the location of the Skoros Orb's Hell Soul. And the players have been curious about Hell. A long time ago they bought a diving bell at a black market auction which can take the occupant straight to hell, and their scribe, the noblewoman Ocean Brack, took a trip one night, and came back claiming to have witnessed Castle Satan, and the great demon sphinx Cazamordias, and other wonders.

So they made their way to the back of Aameul's temple and slew the demon knights guarding the hell gate. A great freestanding gate of black stone, carved with every beast and plant in creation, festooned with the living and the dead and all manner of person and creature, and filled all with smoke, which burned about them as they pushed through, and parted, to show a great cathedral decorated every inch with sculpture, and hung with a horrible icon, and before a great altar where crouched a demon of monstrous size stood a woman wreathed in bone, welcoming a line of grey pilgrims clutching the remnants of their former lives, and the pilgrims in their weary line coming through the front doors up a stair of dizzying height, for this cathedral is perched upon the spikes of a great leviathan, so vast its limits can barely be perceived, its other spikes rising like mountain ranges in the distance, and swimming through clouds of burning fire, where lightning strikes in the far distance and illuminates other leviathans, and columns of stone piercing upwards among them. Luckily there were stairs down.

And found a dungeon. This is a fun mid-sized dungeon with a chapel at its center. Demon boglarites wander its halls, but every few hours the Archbishop Aggreal holds mass, and the boglarites withdraw into the center, leaving the extremities safer to explore. This is my chance to whip out every completely nonsensical demon and hell themed art I've found over the past few years. They fought a guy named Daglaroth with a face in his chest. They fought some guys who were just triangles with knives. They fought a giant rampaging white demon.

Eventually they talked to Ser Bettany of Loigeth, a traveling knight, who told them that the shrine handmaiden above is friendly, and they went and talked to the scary bone woman.

"Who is that, crawling from the stairs of the temple? I do not remember thee entering. Art thou denizens of the unholy realm? Such a cold, dark place, I shudder to think of it . . . Spare me thy sword, I will not harm thee. You have come by chance to a place most holy, here in the depths of Hell, the Cathedral of Great Hethradiah, Master of All Reality. Even the dark world, where thou hast crawled from.”

She is tasked with caring for all visitors to the Temple of Hethradiah. The demon on the altar is occasionally eating the dead pilgrims. She says it's okay. She tells them there is a bonfire where they can rest and get all their hitpoints back. She offers them healing services. My players are starting to really like hell.

So after taking out the boglarites and finding a few more mysterious NPCs like a melting punished guy who can't speak and a demon smith who can upgrade their weapons and deadending at a couple locked doors and learning about some artifact called The Crown of Golden Death and apparently the existence of another Archbishop somewhere in the depths of the temple who wears the crown, and learning that "He who wears the Crown of Golden Death will learn the deepest secrets of the temple," they decide to take a crack at the Archbishop himself, who's guarded by a pair of platonically bonded bodyguards named Mysander and Dydax. The players almost take them down in one round with a meteor swarm, and destroy the crystalline Occult Screen behind which the Archbishop Aggreal sits, making his pronouncements and leading mass. He's a horrible guy in rotting vestments and he has a big oversized old guy head and a rotting dog head, and he mutters some vague threat like "This cathedral will be your grave!" and his throne which is shaped like a castle sinks into the floor and opens the doors to the dungeons so the demons will come out and kill the players, and the bodyguards do a pretty good job of softening up the players, and the players run away.

So next they take a crack at level two. This is my chance for a more high level puzzle type dungeon. At the center of the level there's a weird statue of some demon saint and a tablet indicating that anyone who wishes to visit the Archbishop Gorgrudoch must visit the Stations of the Pilgrimage of Voyceps Moth, but the Stations Are Hidden From Sight but May Be Visited In Any Order, and there's just room after room of completely terrifying demons, like a dead dragon infested with some kind of gigantic demon parasite, and a by the book pit fiend, and a giant statue of a colossus with a hundred arms and a note next to it I forgot to delete that says "Statue comes to life," and rumors of a VEIL BEING with a paralytic gaze, and a conjured demon called VILE ANNIHILATION, so basically they're gonna be here for a while.

But the good news is three of them are level 21 and have taken some hand-crafted epic level feats and the wizard just got access to 10th level spells and their Holy Avenger is just melting demons and we're having a ton of fun. Hell is good.

New comments are not allowed.