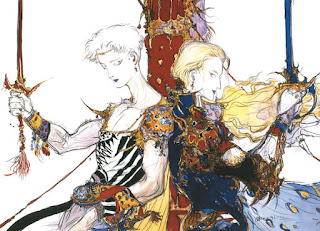 Like this. It's the history of Orostranthy I suppose. The inside of Solemn Cry has a Final Fantasy flavor to it. Really high ceilings, polished marble, views of the city from high up. Guards in stone armor. Yellow light through open windows that look out on the cracked landscape of the wastes, in all directions a canyoned land, copses of poisoned trees, thin clouds blow in a whistling wind. 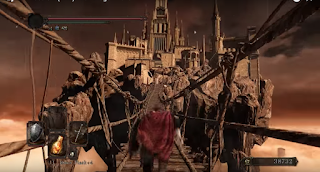 So you're in here. And what comes down the hallway at you--this is really as far as I've gotten--is the half-dragon. I have a few ideas for what it looks like but I'm imagining it's extremely traditional, like one of these:

Except it's cut clean in half, only half of it is coming at you. There's just a polished smooth surface on the flat side, hard as stone, and the live side is alive and reptilian.

I imagine it has half the stats of a full-grown dragon. So 1/2 the HP, 1/2 the attacks (except same damage and bonus), 1/2 the breath-weapon damage in half a cone, fuck maybe even 1/2 the AC. They only tell half-truths.

I bet the flat side is immune to magic and damage. Maybe it can fall over and crush you with it.

They are the children of Azhardhul The Black Drake, who was turned to stone by martyred Saint Coreme after oppressing the kingdom of Orostranthy for generations. The stone was quarried from his corpse and used to make a city at the mouth of the desert valley of Izorides. His genetic material remained in the stone and sprouted new dragons, and they were carved off and put to use as guards for princes and princesses. But the princes and princesses are dead now, and the dragons like all dragons collect treasure. They collect whole, undamaged treasure and virgins, and keep them and admire them for a while, and in fits of mania half them, and when they come to their senses, discard.

There are three or four, all different. I'm sure they tried to combine at one point but it didn't work out.
Posted by Nate L. at 2:56 PM No comments:

Places in the Goblin Wastes

Here are some places in the Goblin Wastes

Solemn Cry - the old capital of Orostranthy, fallen into decay over the past hundred or so years. A great palace rising over a metropolis, the palace is largely empty now, King Roderick gazes into a fragment of glacier brought back on an expedition to the Kraal, Queen Ang disappeared a year ago, half dragons and foreign harlequins crawl the halls of the palace, but the city continues its work. The palace alone could probably hold like five small dungeons, in addition to the weird city at its base. Go here for weird city adventures and scams and bite-sized dungeons, and to buy shit you can't get anywhere else.

The Black School, "Academy of Thaumaturgica Delirium" - a school of necromancy. I don't know much about this place to be honest, but I'm sure it wouldn't be hard to arrange a visit. A good place to buy or steal high level magic, and there's probably a modest but tricky dungeon inside with very good rewards.

The Shattered Labyrinths of Illith Varn - Deep within the Canyons of Misery and Despair is the place where the armies of Illith Varn were driven two generations ago, and the wizard pursued into its depths and beheaded, and the Skoros Orb, the source of his power, lost. Rumors say the Skoros Orb has been found, fog pours from the entrance to the labyrinths, and the floating fortress of the Sky Witch is anchored to the sky above. Many are gathering at the entrance to the canyons to conduct expeditions inside. This is a gigantic multi-level dungeon with a town at the entrance to rest and repair and get deep into NPC drama. Could probably last up to level 20.

The Augur of the Sun - a blue-walled keep kept by Threzdan Osc and the remnants of the dwarves which did not travel to Abazidun to serve the King of Diamonds. Dwarves have been seen throughout the Goblin Wastes searching for artifacts to bring to the Augur of the Sun, but Threzdan Osc receives no visitors. A friendly town if you can get inside, and they've been collecting magic items across the Goblin Wastes for an ~~unknown purpose~~ so these are here too.

The Red Lake -- its red depths are rumored to be the location of the Lunar Palace, where the Fairy Queen Marybelle fell to earth before time began, but dives have turned up nothing. A mystery???

The Corpse of Urizen and the Cathedral of Change -- here is where Urizen, Demon Lord of Change, was slain by the Fairy Queen Marybelle at the beginning of time. His corpse has blighted the landscape and reality here is twisted with the remnants of his will. The Cathedral of Change was constructed here millennia ago, its servitors search ceaselessly for the remnants of Urizen's soul and wait for the return of their carnifex, Pallid Gross. An extremely dangerous area and high level dungeon, there's probably some insane artifacts and bosses inside. Don't go here.

The Prison of Dendric Vast -- much discussed. A green-walled keep, within are hundreds of prisoners kept by a bureaucracy of prison wardens, and a prison block warped by the power of Urizen and crawling with demons and cultists. The prison dwells in endless night, a dragon of slime dwells its halls, and those who live here dissolve into rot and insanity. Dendric Vast has been assassinated, and the prison is now led by Witch Captain Ogremonde and the Judicar Taltralth Yrbicorn, while the imprisoned Medusa Malareth and Carnifex of the Church of Urizen vie for power. We've been here for about six months IRL, 10 days in-game.

The DeadBoys -- a renowned adventuring party, led by AXEN GREAT the thief, BLANK the wizard, and BLATHOUS HORZEN a paladin of Fnorn, Lord of Winter. They have all died and been brought back through loathsome means to further their power. They are rumored to possess a hungering bow, an arrow of death, a blade which can see in the dark, a spell which can erase reality itself, and a fragment of the body of Imix, Prince of Fire. They and their dozens of followers are responsible for innumerable crimes, and it is widely understood that they'll demolish any village that won't accomodate them, Blood Meridian style. Currently traveling to Rappan Athuk the Dungeon of Graves to plunder the tomb of Orcus. I prepped these motherfuckers as a potential rival party, they're still out there and they have some good shit in their inventory.