The Sky (what we've been up to)

So in the course of polishing off the Shattered Labyrinths of Illith Varn, my players happened to defeat the Sky Witch Jupiter Volaris and came into possession of her flying fortress. It took, from my perspective, a long time for them to think to simply fly straight up, but when they did, I had a sky map ready. "Okay, to the north from far off you see what looks like a floating island with a tower on it, and to the south, it looks like a floating island with a dragon statue on it ..."

Thus did my players explore Tower Island (time wizards keep a parasite-man hostage up above, automatons of the gods protect an ancient secret underneath), Dragon Statue Island (20-40 rolling furry abominations swerve around lakes of lava pouring out of a dragon statue's mouth, a fire goblin just wants to eat the lava unmolested), Palace Island (a fragment of the Palace of Sublime Authority from the surface, protected by knights with seared eyeless heads who can shoot giant arrows up to a mile away), and Mountain Island (a mountaintop monastery where the wet-nurse of Voyra of the Hidden Ways still lives; at the mountain's base, a village of ancient halflings, once servants to the gods, are kidnapped and cannibalized by gigantic trolls).

Here we had the DISMAL ABODE of CALAGON, THE DISMAL TWIN: a run-down, nearly abandoned mansion of a cruel and hated god, so despised by his own family that he was locked underground, never to be seen again. It is said that his love was so great, that anyone who encountered it was utterly destroyed. And no matter how many he loved, his love ever grew. Thus a torrent of sacrifices were brought before him, and still he called for more.

A good excuse for beautiful youths locked in rooms and protected by friendly but evil individuals. As they were working for a rapist and a god, my players killed almost everyone they came across, and saved everyone else they could. Some of the once beautiful youths had been transformed into screaming slug people, etc. There was a witch. They befriended a behir. Etc etc.

In the final chamber they confronted Calagon, a guy made of stinking skin presiding over a bed of gore, and protected by a gigantic golden insect named Vithra, who seemed really keen on keeping Calagon in his bedroom. Anyway a final battle ensued, which seemed maybe a little too easy (that's all it took to kill a god?), and they found a gate in the closet to the aforementioned Radiant Citadel, guarded by two priestesses of Vellisex, and to their dismay discovered the truth: Calagon was fine and had escaped long, long ago, and was busy hanging out with his brother in a palace in the middle of a city in the sky.

Gazing at the city from a rocky island just off-shore, where the Tower of the Divided Eye casts its light across the murky red ocean --

"Smoke rises from the city. You hear distant screams. Here and there picking their way over the rooftops you can see gigantic golden spiders, like the Half Life striders. The gigantic goblet rising over the city looks a little off somehow, its light kind of muted and patches of it are tarnished." 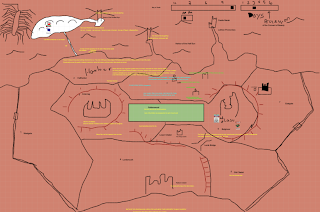 So now we're in a city. Encounters have included:

- One of the Beloved of Vellisex (that's what they call the giant spiders -- up close you can see they're covered in a kind of platinum gold fur, their heads are covered in goats horns, and they have hooves instead of spider-feet, and grasping claws that dangle down from their bulbous bodies which carry nets made of bone, hooked spears, and other horrible weaponry) protected by a retinue of the Golden Order (the elite knights of Vellisex the Golden) . . . the Beloved has a princeling in his net, who cries out for help

- The Golden Order declares a sudden quarantine zone, the streets are blocked, and Rot Hunters rush forward to put the diseased block to the torch

- A group of deathrot slimes look like tar patches with bones in them, actually they can climb walls and inflict death rot (you take damage each round, also if you get 10 stacks of deathrot you die)

- A drug-dealer who sold the players "fluke" which is a little worm you put in your eye and it makes you high. They got too fucked up and insulted the Golden Order and Sad Ed got thrown in jail. Luckily, he is level 25, so it wasn't too hard to break out, and received an invitation to work with the Perfumer (drugdealer), he is said to reside in the Church of War, somewhere in the Old Citadel.

The cultists of the Divided Eye had the players travel to the Church of the Claw to deliver a message (a list of goods -- candles, incense, holy water, sheep ...), and the Terminal Unguis of the Church of the Claw, a friendly fellow named Hector Brute, asked the players if they might be willing to put to the sword one of the Tarnished, a Once-Beloved of Vellisex named Ash-Drinker, who's taken up residence on the Lordsbridge. The Procession of the Convent of Beauty needs to process to meet with Vellisex in three days (one of the Claws of the Church of the Claw is a tower filled with nuns so beautiful that they can never be looked upon, therefore they process under a giant opaque tent; the other claw is filled with monks who spend all night speed-writing religious texts and all day training in violently high-speed acrobatics) and it would be best if they could cross the Lordsbridge, instead of going the Long Way Around.

So the players checked out the Lordsbridge, and I once again failed the "write a small dungeon challenge." On top of the Lordsbridge -- Ash-Drinker, a gigantic insane spider that breathes acid slime and is wielding the spiked corpse of a golden knight as a weapon, being worshipped by one of the Goldmasks (those afflicted with Deathrot sometimes choose to don the Goldmasks and thus come under the protection of the Golden Order, they are allowed to pass freely through the city), and protected by a group of grafted men shaped like dogs. Stairs down leading into the bridge, a causeway of narrow hallways with glowing trees, a Tarnished Knight, a Star Creature, a Cleric of Vellisex, a Swarm of Cast-Off Limbs, and Spite-Tooth, an Abomination of Rathor, who suggested the players seek the Exiled Church in the Lower Citadel to speak with her sister Gut-Warp, who might assist the players in their rebellion.

Luckily, an elevator down to the Lower Citadel was just a few rooms over. Down there -- piles of corpses, poison water, an endless parade of slugmen dragging themselves from the swamp . . . they went back upstairs.

After dispatching Ash-Drinker, they thought, hmm, what to do next? Why don't we go meet with the Perfumer in the Old Citadel? And in short order mixed up Old Citadel and Lower Citadel and found themselves back down the elevator and wandering in the Bad Part of Town: empty ruined streets of a city that was here before the city was here; distant shrieking; purple sludge swallowing up entire blocks; far away amidst the swamp of the Lower Citadel, a castle, said to be called Two-Fang Castle; and flocks of shrieking flying witches way too eager to die, which they were told are birthed anew by the Many-Mother, who resides somewhere in the ruins of the Lower Citadel...

They realized eventually they were going in the wrong direction, but, "It's okay Nate, you already drew us this nice map." And anyway, they have a quest to kill the Many-Mother, another quest to meet with Gut-Warp, and they hear that the lord of Two-Fang Castle, Malric Godson, might give them somewhere to stay. 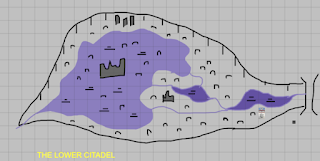 I left out a lot of stuff about like their new lightning pterodactyl, their flesh-steed named Gorgo, the knock-off Griffith named Vladweth they rescued from Palace Island (upon learning of the sky gods: "What must it be like, to be a god?" My players are resisting meta-gaming so they haven't murdered yet), and I didn't even touch on the Windskier Mountains and the plot to resurrect Ancibin, Demon Prince of the Air. Anyway that's what we've been up to!