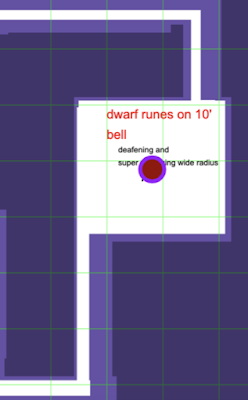 A big metal bell sitting on the ground in the middle of a room, inscribed with obviously magical dwarven runes which say something like "DANGER! KEEP OUT! NO ONE ALLOWED!" If it senses any movement in the room (with magic blindsight, so invisibility or silence doesn't work), it gongs, automatically dealing a large amount of damage to anyone in the room and in the hallways up to the turns, and inflicting deafness if they fail their save. The bell then has a lingering tone that lasts for a minute, during which it cannot gong. After one minute, it resets.

This distracted my players for about two hours and and inflicted a humongous amount of damage.

This one's a little more complicated. Both of these maps are vertical maps, you're looking at a side view. Each square is ten feet, and the rooms are square from the top down, so the top shaft is 30' square and 160' high and the bottom shaft is 50' square and about 25' high. Red squares are doorways.

Players start in the bottom room.  A red carpet runs along the floor, up the wall, and to the doorway in the ceiling. Blood drips down in a steady rain through the square opening and soaks into the spongy, porous ground, which grows weird pink flowers. The vertical shaft above is smooth stone wall except for the red carpet, which continues to run up the wall to the closed door. The shaft is completely filled with this blood, which is dripping from innumerable small cracks in the ceiling. The dripping blood acts as an anti-magic field--it suppresses anything magical it drips on, cancelling spells, magic items, summoned monsters, and so on, and no spells can be cast into the area of the dripping blood, including teleportation. The blood can be cleaned off an item with an action, as long as it's outside the dripping area. It takes a little longer to clean a whole person, I'd say maybe a minute, unless they can think of something else. The antimagic blood loses its properties after ten minutes.

At the very top of the shaft is a metal guard box. Arrow slits are set in the bottom of the guard box in a square pattern, which can be opened and closed with a simple sliding mechanism. The sides of the guard box are open doorways, though the players probably can't see that from the bottom of the shaft. Inside the guard box are four low level vampires with crossbows and swords. They also have with them four giant spike balls attached to chains, which they can use an action to shove out the guard box, dealing a large amount of damage to anyone in a line underneath them. They can then use a winch to draw the spike ball back up over a minute, or release the chain with a release mechanism, causing the chain to drop to the floor.

This entertained my players for about a session and a half. They were really stumped for a while, but thought to smoke out the vampires by building a fire at the bottom of the shaft, using the smoke for cover, and hauled in a reverse gravity boulder to drop upwards onto the guard box, breaking the arrow slits. From there it was a pretty simple brawl, until they found the very next room where four elite vampire knights camped, but we won't get into that here. 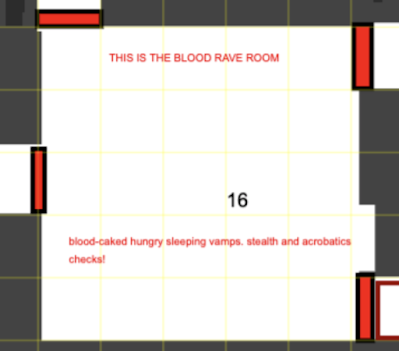 Blood soaked room. This room is filled with sleeping, quiescent vampires, naked and slick, wet with black blood that’s slowly dried into clotted mud. There are over a hundred of them, these are the sleeping reservoir of Queen Tetranoska’s nobility. Every few days they awaken, screaming and shrieking, and begin churning against each other, their eyes open and the clots crack, and the reservoir in the ceiling cracks open, blood comes spraying down, and the vampires, screaming in ecstasy, perform an ecstatic dance of incredible violence for two to four hours, and then turn back to their slumber.

This room is filled with 128 fully statted vampires. However they are sleeping, so their passive perception is 9. If they awaken, it takes them two rounds to shake off sleep, and then 1d4+2 will come searching for the source of the sound. If they’re all awakened into blood lust, then they’ll come surging as a nightmare mass of starved and violent vampires. They only have enough energy to chase for 1d4 minutes, after which they’ll begin to slow and stumble, give up the chase, and return to room 16.

If engaged during a blood rage, they’ll be at full power! and run freely through the entire castle for 2-4 hours.

Scattered on the floor are severed body parts, pulped guts, mashed eyes, and some jewelry worth 3000 gp.

My players did manage to encounter the vampires during a blood rave, and did have to run through the castle ahead of 128 screaming maniac vampires.