What I've Been Up To

Playing my online game every week or two or three.  It was a month between our previous session and last week's session.  The guys are involved in an assassination attempt on "The Overking of All the Lands," a purple orc with a broken neck and a spear who his side, who's stolen the 17-Eyed Spite Crown of Scorn the Androgyne from the Princess Derrida von Chasm, and taken her as his consort.  Jaime von Klaw (played by Michael Tom), a rich wizard from Belmric and an atheist, got drunk in Olomoc several months ago and was waylaid by thugs, and in his drunken stupor appealed to the God/dess Scorn for protection.  The thugs were turned to stone and he was laden with a geas to retrieve the 17-Eyed Spite Crown and return it to a rightful priest of priestess of Scorn.  Every day he doesn't seek the crown he loses one point from a random stat.

Okay.  So what do I need to make this happen? 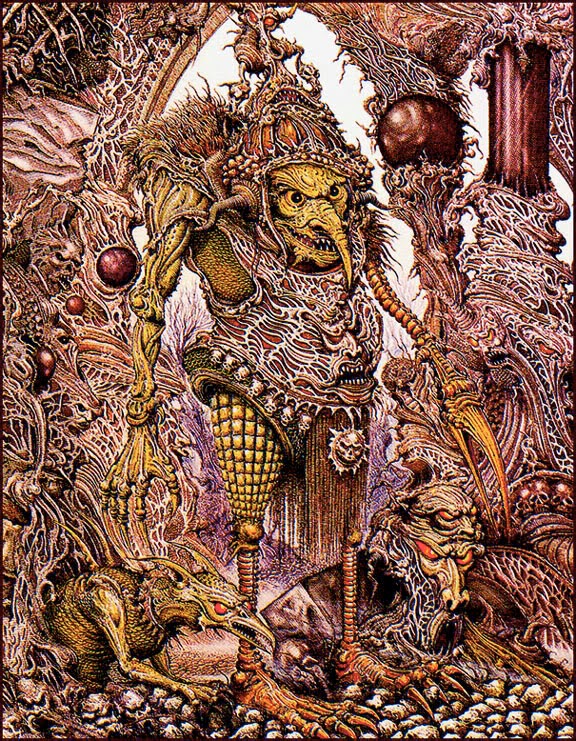 Plus I can use this for the rest of the Overking's minions.  And this for his fortress (more or less).  And I can say that the original builders of the fortress were obsessed with (roll, roll) camels.  And that the warband of the Overking of All the Lands worships (roll, roll) Abjecta, Queen of Maggots.  So they're roaming the countryside, stealing people, planting the maggots of carrion crawlers in their flesh, and cultivating them in preposterous egg-shaped cages on long thin legs.

I got to use this scene.  Frederick Longtooth, a werewolf monk of Fenrath, decided to climb up the cage and cut her throat, dodged the torrent of carrion crawlers maggots that flooded the cage area, and avoided taking I'm pretty sure any damage as his friends doused the swarm with fire.

Afterwards Sad Ed goes "Nate, I'm killing all of the prisoners, and burning their corpses."  "Okay Thomson.  A column of greasy foul-smelling smoke winds upwards over the fortress." 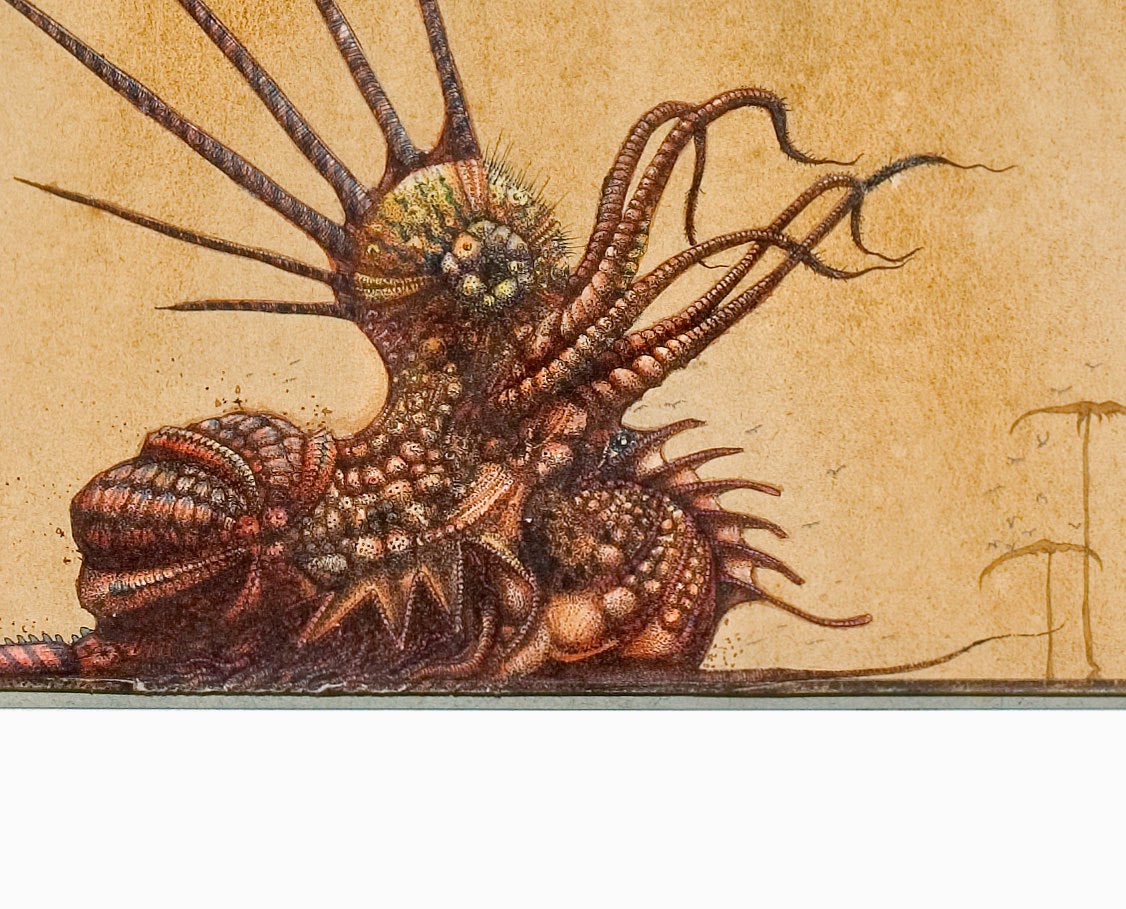 Before this they had a long sneak and kill in the fortress that ended with a running battle with the forces left behind to guard the castle while the Overking and most of the warband were off gathering people for the maggot making process.  They killed so many goblins.  They killed the dark elf cleric Veshtoroc von Toxin.  They set some goat men on fire and sent them running into the shanty-town goblin camp, which caught on fire.  When the Great Grub (size H carrion crawler, HD 8) plugged into their tower and climbed the stairs and started waving its bazillion paralyzing tentacles at them, they threw a potion of turn-to-stone into its mouth and turned it to stone.  When the remaining goblins and tiny jackal men and guys with mouths on their hands and wargs barricaded themselves in the throneroom, Sad Ed drank a potion of eat metal and bit a hole in the door and uncorked a bottle of hallucinatory green smoke and smoked out the goblins and they ran in and murdered everybody.

And there chained to the throne in a chainmail bikini was Derrida von Chasm, lost princess of the Moriad, and a formidable priestess of Scorn.  "Untie this collar at my throat!  For it makes me invisible to the eyes of my God, and unable to cast their magic." 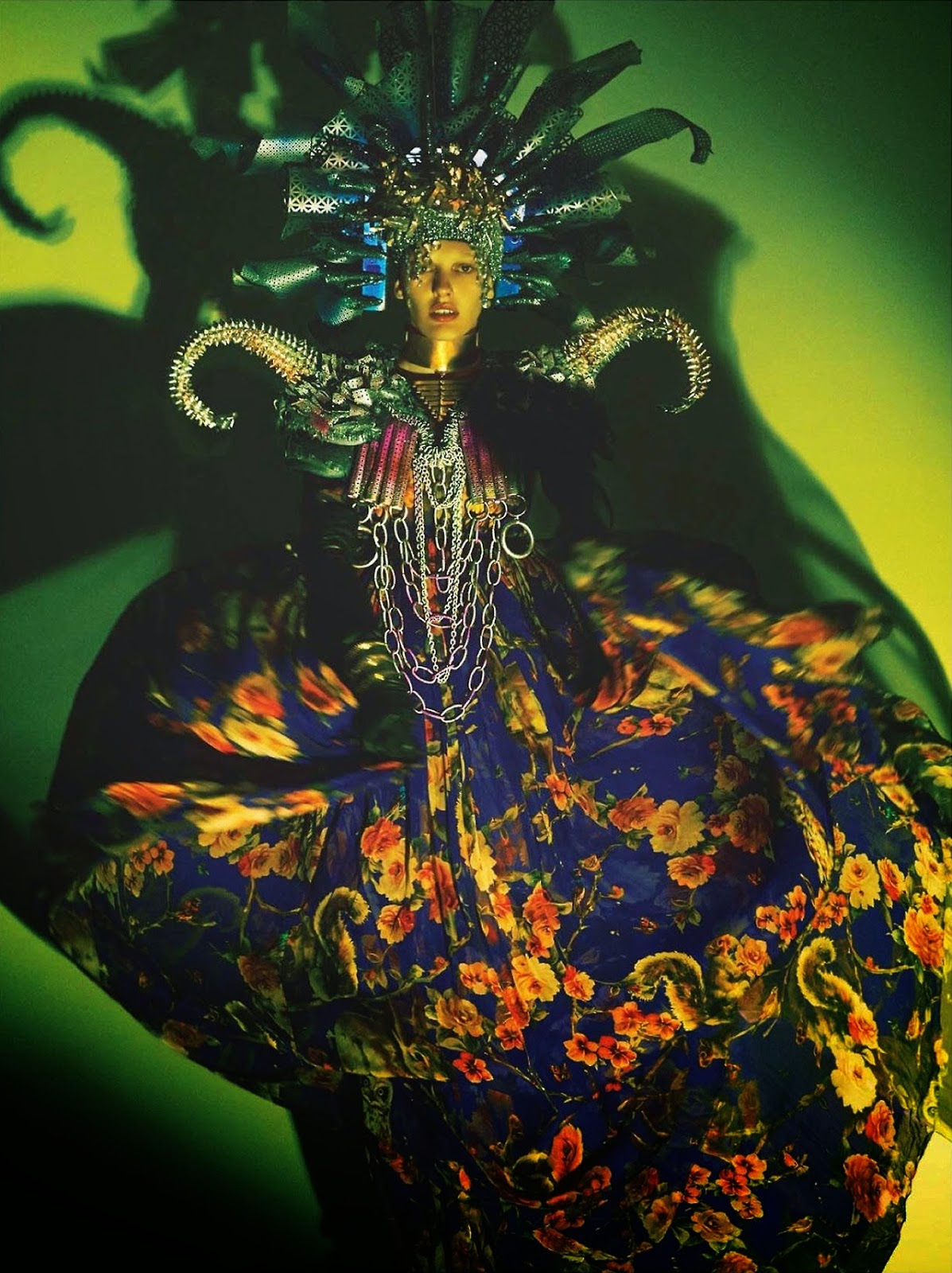 "Thanks," sez the princess.  "I was on quest to the Canyons of Pain and Misfortune when I was waylaid by this orc. I would have slain him in an instant, except the weapons of my companions could not wound him, and my spells could not harm him.  Slay him!  I will aid thee."

And now they have a high level priestess on their side, just as the returning warband of the Overking thunders on the horizon, and my players are sending emails back and forth going "Fuck, what do we do? what do we have? how are we going to do this?"  They're very smart.  I'll have to think up something good for Wednesday.
Posted by Nate L. at 6:57 PM No comments:

Orostranthy, lost cities, and the shattered labyrinths of Illith Varn

Not so long ago the Goblin Wastes were called Orostranthy, a ragged kingdom of dwarfs and people, which was beset by the dead minions of Orcus to the northeast and the living minions of Urizen to the south. The Silk Wall was erected about eight hundred years ago to block the advances of Urizen's goblins - they spilled from his feathered head when he was slain by Queen Marybelle soon after the beginning of time - but Havith Orr the Goblin City was moved north on the back of a four-headed turtle the size of a mountain. So the Silk Wall instead blocked the remaining southern dwarfs in with the remnants of the demons, the Chaos beastmen, and the demon worshippers which alternately plague and settle the land around Urizen's eternally rotting corpse.

Now the Silk Wall was constructed by an alliance of the people of Orostranthy and the dwarfs, who ruled from their mountain fortress, "The Augur of the Sun." The beastman slaves of the dwarfs and the rough peasantry of Orostranthy pulled the stone from a ruined city of unparalleled beauty which sprawled for nearly a hundred miles between The Augur of the Sun and Orostranthy's capital city, Tcorsk.  When the stones were removed, a twisted, changing landscape remained. The goblins call this land beautiful, and dwell in it.  The dwarfs call it ugly, and live in siege fortresses to block their sight of it. They construct tunnels beneath this land, and exile their traitors into it. People fear this land. Where they could not scavenge all of the stone, districts of the vast city remain, but none reside there except puddings, animals, and beastmen. People who live long in those districts begin to speak old poetry, see ghosts, walk backwards in their sleep, and eat each other.

After the wall was built and Orcus was slain and buried in his Dungeon of Graves, a long decadent peace came upon Orostranthy, until the Black Drake Azhardhul came from the West and established a fortress in the foothills of the Black Mountains, and waged war upon Tcorsk and the monarchy there.  His slaves were chained and branded and made to worship him.  It is said Azhardhul had one hundred legs and four wings and was three miles long, and that the touch of his violet breath turned the living to ash.  Warriors of Orostranthy came to slay him but he was unwounded by their weapons, unturned by their magic.  The maiden Coreme led a heretical cult against his rule, and was flayed and crucified for her sin.  But as she died she prayed to her own holy name, and the dragon turned to black stone.  The freed slaves of Azhardhul made a city from the dragon's body and lived in it, but were raided by northern barbarians, and not a stone remains except for the Shrine to Saint Coreme, still Holy to the people of Orostranthy, who remember but dimly the rule of the Black Drake.

Orostranthy declined. The wizard Illith Varn led an army against Tcorsk, but was driven back into the strange dungeons beneath the Canyons of Pain and Misfortune, in the changing lands south of the Silk Wall, and beheaded by assassins in his sanctum. Wars with the goblins of Havith Orr, internecine warfare, beastman warbands, and demonic incursion led to the loss of previously strong trade with Loth Armanea and the blue elves of the Cobalt Isles; with the white elves of Undying Velenheim; and with Belmric. The country outside Tcorsk became unsafe, and over generations Tcorsk itself dissipated, while the succession of monarchs sought new ways of power: worship of the Angel of Colors, conjuring of airey spirits, consort with the sorcerers of the Black School, and eventual subservience to the skilled dwarfs at the Augur of the Sun. When the dwarfs migrated south to the black jungles of Abazidun to follow the worship of their new diamond god, Orostranthy's isolation became complete.

The highways that cross the kingdom are in disrepair. The labyrinth surrounding Havith Orr has extended far across the landscape, and Havith Orr creeps northward by miles each year. The Silk Wall is unguarded and broken in many places, and kept by monsters in many others. The people of Tcorsk are gone, having sought refuge in other cities - Olomoc, Beldr Tuum, Loth Armanea, the Seat of Worms, Velenheim, and even Belmric and the western cities. Only the palace Solemn Cry remains, where King Roderick sits in his chambers, gazing into the fragment of glacial ice brought to him from the Kraal, and Queen Ang is vanished. No one even remembers how long she's been gone.

And now new rumors issue from the Canyons of Pain and Misfortune: a deep fog billows from the dungeons there, and lights can be seen in the windows of the mesas at night. The Skoros Orb has been found again, in the tunnels far below, where the armies of Illith Varn were driven and slaughtered, but none have recovered it. The flying fortress of the Sky Witch has anchored in the air over the Canyons, and moves not as the weeks pass. And explorers who enter the shattered labyrinths beneath the canyons bring to the surface tales of a golden dragon, a river of slime, the locked gates of a strange city, worshippers of a pantheon of unknown gods, and the lost riches of Illith Varn's army . . .
Posted by Nate L. at 3:49 AM No comments: