"A Place of Thorns"

This is another overland area, directly to the east of the beastman forest in my previous post. Again, it covers an area that can be covered with one day's hard travel. My players pretty much stuck to the west side of the map, where the forest begins, but still encountered a bunch of enemies, before investigating the fire cave, saying no to the fire skull's offer, and going back into the forest.

"A PLACE OF THORNS" 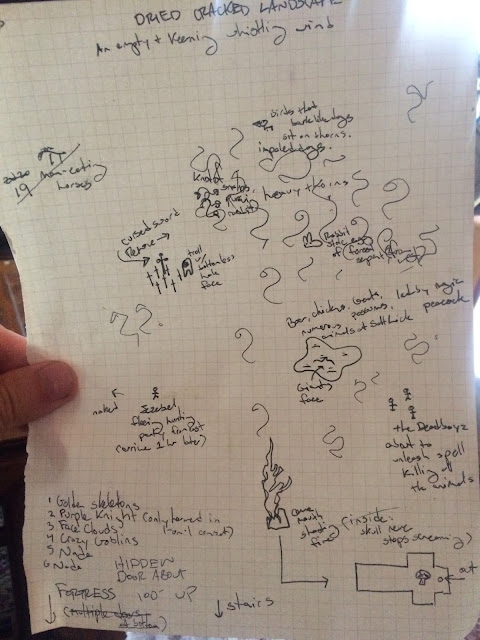 This is a dried, cracked landscape. An empty, keening wind whistles ceaselessly. A forest of black thorns springs from the plains, far higher than a man's head.

1 d4+1 Golden skeletons of Urizen. These look like Terminator 2 type metal skeletons twice as big as a guy. They're constructed by the Demon Lord Urizen for the same purpose as the terminators. Gold skeletons, HP 60 AC 19 Claymore +12 d10+6, Magic Resistance 50%, at half health releases electricity in a 10’ aura dealing its remaining HP in damage.
2 A Purple Knight on a Purple Clad horse, demands payment of a single person or one-on-one combat for safe passage. HP 100 AC 22 3 attacks +10 2d8, Strength +10, unable to do dirty maneuvers, when takes 30 damage his helmet comes off and starts shooting purple fireballs 5d6 damage +10. Can only be harmed when fighting 1 person at a time. Has like 12 severed heads on his horse.
3 d12 clouds with horrible human faces descend from the sky and rain swarms of worms.  Each produces a 4HD swarm which deals d4xd4 damage per round, slows and nauseates target.  The clouds hover about 100’ overhead, laughing.  Immune to normal weapons, but 10hp each.  As the PCs take damage they lower long tubes to suck up their juices.
4 11 goblins riding hogs, they can each fire d4 arrows per round, HP 7 AC 12 +8 d6 damage, move 40’, if killed they fly back screaming like 100’ and bounce across the landscape in 100’ bounds.
5 Nada
6 Nothing

HEAVY THORNS: A dense thorn forest. Thorns are as big as hands, or longer.

BIRDS THAT BARK LIKE DOGS SIT ON THORNS. IMPALED DOGS.

GRAVEYARD: in a hollow surrounded by low hills, dozens of graves stripped by the rain and the wind, at center of the graveyard stuck in a patch of barren earth is a weathered greatsword sword. If the sword is removed, d12xd12 zombies emerge from the earth and it begins to rain. If retained, the sword can be commanded to seek a foe’s heart 1/week, dealing a critical hit (if the attack hits) and if the foe is slain, the wielder will heal the amount of damage dealt. Thereafter crows will gather and watch the wielder closely.

TROLL: Crawls among the gravestones, keening and moaning, a long fat troll, instead of a face it possesses a bottomless pit, it will grab foes and tip them back into its face.

SALT LICK: A mineral lick. At the center of the salt lick, a giant's face formed of salt protrudes. Numerous animals come to lick the salt: boars, chickens, goats, possums, all led by a magic peacock.

Hiding nearby is a party of evil adventurers (in my game, the DEADBOYZ), about to unleash a powerful spell (Fireball or Circle of Death or something) to kill all the animals and harvest their bodies.

FIRE CAVE: shoots fire in a plume visible from miles away, especially at night. It’s like a charred mud cone, ground all around it is thick and black. Up close can be heard endless screaming. Inside there’s just a narrow tunnel that goes down 300’ into a vault. Fire deals 4d10 damage per round, within 10’ its 2d10 damage, feels hot within 60’.

VAULT: Charred marble walls. Two halves of a statue of a sexy woman.  Skull is a barbarian warrior who slew an army of women “TULRU KARQ” He can provide a skill that’s so complex it works only once! versus woman only — if attack hits, woman will move up to 30’ and attack nearest woman, if hits then chains endlessly.
Posted by Nate L. at 11:30 AM